Atomic Coin (ATOM) is an abandoned project and an exit scam that went bust in early 2018. However, do not mistake this scam project for another venture with the same ticker Cosmos Atom (ATOM). 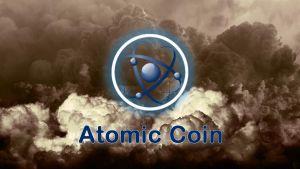 What Is Atomic Coin (ATOM)?

Atomic Coin (ATOM) (not to be confused with Cosmos (ATOM)) was meant to be a community-driven decentralized peer-to-peer cryptocurrency for payments. The idea behind the project was to provide a strong alternative to Bitcoin by focusing on betting sites, exchange’s futures, and educational funding.

The project began sometime in 2016, and the ATOM coin hit the exchanges in autumn 2016.

The Atomic payment network was powered by ATOM cryptocurrency. It was a mineable coin with fair distribution mechanism, which fueled the enthusiasm surrounding the project. 252,000,000 ATOM coins were planned to be issued.

All in all, it seemed like a legit and exciting project.

The Atomic Coin developers abandoned the project in early 2018. In December 2017, the project developer used Bitcoin Talk forum to announce that the coin would be forked and that there would be a coin swap.

The rules of the token swap required the coin holders to transfer their ATOM coins in the project’s web wallet. Once the funds were transferred, most users got wise to the fact that they are unable to withdraw their coins, as they were locked. Any complaints about the situation posted in the Bitcoin Talk forum were deliberately removed.

The project developers had pushed the release date of the coins for two months until they left the project. The AtomProject’s website, GitHub page, and BitcoinTalk thread were shut down, and there were no further updates from the developers. 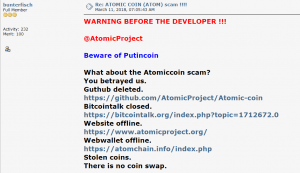 As such, all user funds have remained in the locked wallets. The project was sabotaged by the fraudulent developer(s) and has been proclaimed as a scam ever since. The ATOM coin was delisted from most exchanges, yet there still are few small exchanges which have markets for the old ATOM coin. Be careful and do not fall for this scam.

Fast forward two years and a new, ambitious project Cosmos ATOM have claimed the ticker ATOM. Do not confuse old ATOM coins with the new ones.

The story of ATOM coin can teach everyone a valuable lesson: remember to do your research. Never blindly trust other people’s recommendations. If the project’s developers are anonymous, and there are no real people to take responsibility for their actions, it is likely a scam.

If you want to learn more about how to identify fraudulent projects or ICO’s, see our guide about ICO risks.