Bitcoin.org website gets hacked by ‘double your money’ scammers

In an audacious move by scammers, the Bitcoin.org website was hacked earlier today with a giveaway scam placed on the homepage.

Such scams usually take place on YouTube by way of recycling video content from prominent crypto figures. But to have it happen on the official Bitcoin website represents a new ploy not seen before.

The website went down for a few hours Thursday morning, but normal service has now been resumed.

This incident highlights that scammers are working on increasingly creative ways to part you from your crypto. But why do people continue to fall for it?

Bitcoin.org is the authority on Bitcoin

Satoshi Nakamoto and Martti Malmi first registered Bitcoin.org during the early days of the project.

When Nakamoto decided to step away, he gave control of it to several other people not connected with the development team. That way, the responsibility for its continuation and upkeep did not fall with any single individual.

It has gone through various iterations over the years. Beginning as the source for releasing new versions of the Bitcoin code, then moving to a more community-led approach by allowing updates, fixes, and improvement suggestions.

Today, the website sees itself as a host for independent open source development.

On Thursday morning (GMT), Bitcoin.org was hacked with a giveaway scam placed on the homepage. The pop-up box message purported to be from the Bitcoin Foundation asking for users to send BTC to receive double the funds back. 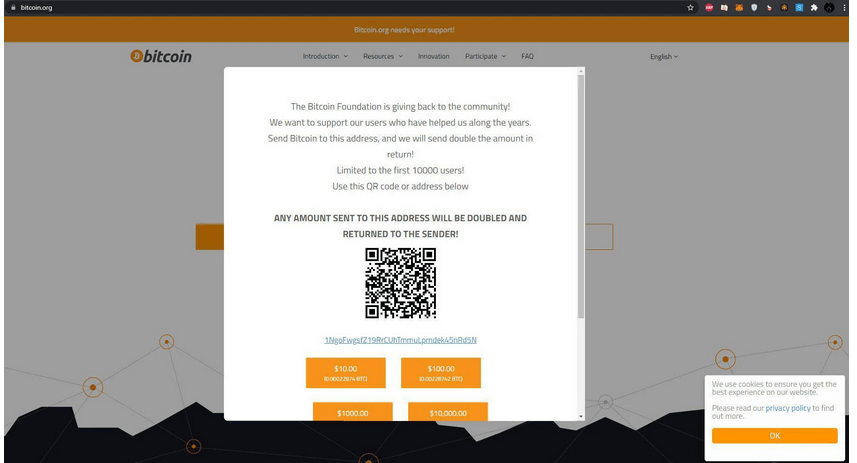 The address received a total of 0.40571238 BTC ($17,700) on five transactions over a two-hour window. But a Reddit sleuth analyzing the address presumes a significant chunk of that, 0.4 BTC, came from the scammers themselves to add an element of legitimacy.

If so, it would appear that four people lost a total of around $55. Since restoring control of the website, the scammer has transferred most of the balance to two separate addresses.

Why do giveaway scams persist?

Coinbase describes giveaway scams as “a form of social engineering” that convinces people into believing the giveaway is from a prominent entity.

“giveaway scams are a form of social engineering in which a scammer attempts to deceive a cryptocurrency investor into believing that a major cryptocurrency exchange or celebrity is hosting a giveaway.”

Although giveaway scams are well documented and a known blight on the industry, people continue to fall for them.

In the Bitcoin.org case, perhaps the website’s authority added to the credibility of the claims. This, combined with greed, can perhaps override people’s better judgment.

Fortunately, the perpetrator only managed to get away with a relatively small amount of money. Sadly, as long as people continue to send money to giveaway scammers, it’s a given that the practice will persist.

on the Crypto Market 👇