How do you compare Cam4 vs AmateurTV? It is up to you to decide which things are most important to you, but here is my take on the important differences.

Cam4 is a major cam site for English speaking viewers, while Amateur TV is more popular for the Spanish speaking world, from Mexico to Spain there are plenty of Amateur.TV fans.

You would expect AmateurTV to be more up to date as it only started in 2008 while Cam4 goes back to 1999. But with Cam4 being a bigger site overall it has been spending more to develop new features as well so they are actually kneck-and-kneck.

In theory, both sites allow their viewers to also be a broadcaster, at least enough to show their cocks to the cam girl for a jerk-off show. Currently, it is disabled at Cam4 as they are working on upgrading the technology. The death of Flash stopped the old way of working and now they have to build a new version. You could still sign up as a broadcaster on Cam4 to show your cam though.

Being a broadcaster on Amateur.TV is just the same and is a good way to let others see you. This is very different from the organized in-chat cam2cam that sites like Chaturbate and Stripchat offer, but it does work.

Both sites allow you to use these symbols in chat, which is particularly great from a mobile, but also works fine in Windows if you press the Windows key and the period key to bring up the Win10 Emoji keyboard.

No, that isn’t possible at either site. But AmateurTV is worse in that you not only need an account, but you have to purchase some coins before you can chat at all. At least at Cam4 you can chat with some of the models with a free basic account.

Result: Cam4 is the winner

Both sites offer you some free tokens when you sign up. At cam4 you get 50, and at AmateurTV you get 1,000. But don’t get too excited by the thousand, as those are very small tokens. And the bonus doesn’t always arive sothat means nothing.

The Cam4 tokens are worth more therefore.

Yes, both allow you to see the video for free but there are limitations. At cam4 it times out after a while and prompts you to sign up for membership. You can get around that simply by refreshing the page with F5 but it is still annoying. At Amateur.TV you get to watch, even as a guest with no account, but you can’t type or interact with the models at all.

Both sites claim to be multilingual, and both the website can be switched between languages and there are models speaking a lot of different languages. It isn’t as great as it sounds though.

The translations for the website into other langauges are often incomplete, at cam4 even common langauges such as French are not complete. At least at AmateurTV the two listed languages, English, French and Spanish, do work prperly.

Most models on AmateurTV will talk to you in Spanish as they are from Colombia but also do speak some English.

On Cam4 models are from all over the world, but there is a built in translator in chat which works ok as long as people keep it simple and spell their words correctly.

Result: Cam4 for model languages via translator, AmatureTV for website in Spanish or French

Private shows at Amateur TV are by default 2,100 coins/min for minumum 5 minutes. The possible choices of price are limited to some presets; 1,500, 3,000 or 6,000 per minute. Each model can also make her own choice of minimum time a show will be accepted. This can be either 0 to disable any minimum or 3, 5, 8, or 10 minutes

Over at Cam 4 the settings are also fixed from 6 to 120 tokens a minute, though most are in the middle to lower price range.

More than half the models at Cam4 are 12 tokens or less with almost 20% being 6 tokens a minute.

As a coin at AmateurTV costs a lot less you have to calculate the prices.

A 5 minute Exclusive Private show at AmateurTV at the default and typical 2,100 coins a minute, where you have bought the coins efficiently in large packs, is therefore:

Taking a 5 minute private show at Cam 4 at the most common price of 12 tokens per minute would be:

Those a common prices, but not the minimums. Cam4 allows 2 tokens a minute, but hardly anybody does that so realistically 6 tokens is the minimum which makes that 5-minute show about $4.55 or less than a buck a minute. Again this is presuming you have bought the tokens efficiently getting the best per-token price.

You have to watch out that at AmateurTV “private chat” just means PM, and yes it is charged at

What most people call a private show is at Amateur TV referred to as an Exclusive Private, and the typical price for those is higher. 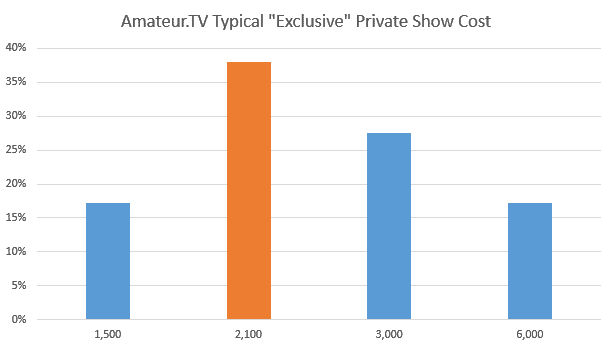 The most common price for Exclusive Private shows at Amateur TV is 2,100 coins a minute.

This means that at the lowest prices AmateurTV is slightly cheaper, but at common prices Cam4 is cheaper.

Result: Tie theoretically but Cam4 in practice wins most of the time

What is a private show anyway

The definitions of what is a “private show” are quite different between the two sites so you have to watch out.

First there is public, you see the video and can see the text chat but can’t chat yourself.

Private Chat: The chat and audio will be private, but the video will remain public. This is a flat rate of 1,500 coins a minute. This is more like PM on most sites.

Exclusive Private: The text chat, audio and video will be private. The room will remain active, but only the paying viewer will see or hear the model. Models choose to set this price from 1,500 to 6,000 with the default being 2,100 coins.

Spies: When a model is in Exclusive Private, other users can spy: will be able to see and hear the model, but they will not be allowed to participate or chat. The price for this, set by the model, is 600 to 1,500 a minute

On Cam4 there are really only public show, which isn’t charged, or a private show. Private shows can cost anything from 6 tokens to 120 tokens a minute, optionally have cam2cam (when it is working) and also optionally allow others to spy for a cost of 3 to 60 tokens.