KISS is a WMS-powered online video slot released back in 2013. At the time of its launch, the slot was an innovative release and the first WMS product using the Colossal Reels feature. The game is played at two reel sets, the main featuring 5 reels, 4 rows and 20 paylines and the Colossal Reel set with 5 reels, 12 rows and 80 paylines.

Inspired by the famous rock band KISS, the slot benefits from stacked Wilds cloned to the Colossal Reel set when appearing fully on the main play field and a free spins feature awarding up to 20 free games. When playing the game at all paylines active, you can win as much as 25,000 coins in a single spin.

The game is inspired by one of the most popular American rock bands KISS and it features great visuals taking into account that it was originally launched as a land-based slot machine. Above the main reels set you will see the famous band’s logo while the reels you are home to stacked Paul Stanley and Gene Simmons symbols which deliver the top payouts.

Icons depicted as Gene Simmons’ tongue, Red Haired Stanley, the guitar and guitar pick sit in the middle of the paytable while low-value symbols are represented by standard playing card icons from Js through As. Some of the band’s hits like Detroit Rock City, Rock and Roll All Nite and Shout it Out Loud contribute to the overall fiery atmosphere the game provides you with. Diehard fans of the band will love the game for its appearance, especially when the free spins feature is triggered and the footage of a KISS gig starts playing.

Of course the Colossal Reel set, similar to the ones you may have seen at Giants Gold, Spartacus or Rainbow Riches slots, brings this game to another level. Especially on a big screen.

Throughout the game, you will benefit from Wild represented by all four band members. It appears on all the reels to complete your winning combinations and can show up in a stack to cover a reel on the main reels set fully. Once this happens, the Symbol Transfer feature is activated and the rock legend shows up at the bottom of the respective Colossal Reel and sets it on fire covering it with Stacked Wild entirely. 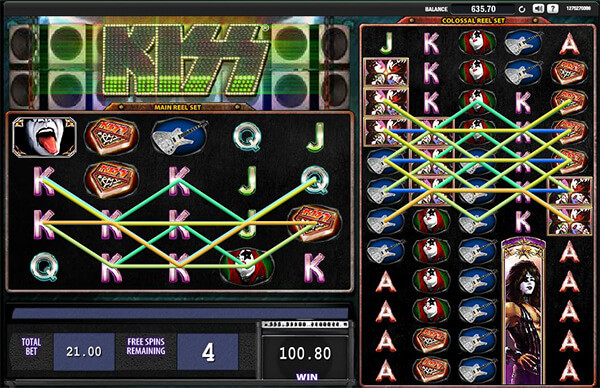 Another special symbol is KISS Scatter which appears on the reel 1, 3 and 5 of both reel sets. Land 3 or more KISS Scatters anywhere on both reel sets and you will activate free games. Landing 3, 4 or 5 Scatters grants 8, 12 or 20 free spins. During free games, if one or more stacked Wilds land on the main reel set, they will be nudged to cover the reel fully. The Symbol Transfer feature is available during free games too, so you can hit some big wins thanks to more Wilds appearing in stacks and cloning to the Colossal Reel set.

The top paying symbol is Paul Stanley landing in stacks that can cover up to 4 positions on the main reel set and up to 8 Colossal Reel positions. This symbol awards 250 coins for five symbols of a kind landed on an active payline. The Gene Simmons symbol functions the same way and it pays 200 coins for five of a kind.

Landing 3 or more KISS Scatters anywhere in view on both reel sets will earn you between 2x and 20x your total bet. These payouts may not be mind-blowing but thanks to 100 paylines, you can create multiple winning combinations at once, especially if you manage to cover the reels with Stacked Wilds entirely.

The game is playable from $0.50 up to $250 per spin and allows you to set the bet according to your budget. Try to keep all paylines active for the best odds of winning, though.

The RTP of the KISS slot is 95.94%, which gives solid value for the money you have invested. For higher returns check our loosest online slots lists.

was last modified: by

Slot machines for sale in vegas