Created by devoted admirers of Japanese samurai cinema at Sucker Punch Productions in Washington, Ghost of Tsushima turns the feudal world of Akira Kurosawa films into a huge, absurdly beautiful game, set during the Mongol invasion of the island of Tsushima in the 13th century. Samurai Jin Sakai, an unlikely survivor of the incursion’s first beachside battle, reluctantly turns to underhanded tactics in his efforts to repel the invaders and save his homeland, sneaking through long grass and hiding on rooftops to assassinate Mongols as well as confronting them sword-to-sword in clashing duels.

All the aesthetic and thematic conventions of samurai films are present and correct: a story centred on honour and self-mastery; dramatic weather that sweeps across Japan’s spellbinding landscapes; standoffs against backdrops of falling leaves and deserted towns; screen wipe and axial cuts; quick, lethal katana combat that ends with enemies staggering and spurting blood before toppling like felled trees. It can even be played with a grainy black-and-white Kurosawa filter, or entirely in Japanese (though the lip syncing is matched to the English script).

This is an unimpeachably gorgeous rendition of Japan’s incomparable natural beauty. A temple resides in a grove of trees whose golden leaves filter the light; red maples and blue hydrangeas stand out against fields of pampas grass. Riding through this marvellous scenery on horseback, you slowly conquer a map forested with Mongol encampments, scenic viewpoints, occupied fishing villages and shrines, unlocking gunpowder grenades, kunai and smoke bombs to use alongside Jin’s katana and bow as his legend grows.

Ghost of Tsushima offers some elegant solutions to the superficial problems with huge, open games like this. Instead of little icons and mini-maps cluttering up the screen and making you feel like you’re playing a satnav, brushing a thumb across the controller’s touch-pad summons a wind that ripples the long grass and guides you to your next destination. Instead of map markers, you can follow golden birds towards interesting places – that is, if they don’t get stuck up against a building or a cliff and disappear.

Other, deeper problems remain, however: repetition, bloat and boredom. Ghost of Tsushima follows a dispiritingly familiar trajectory of a frustrating first few hours, where enemies are powerful and everything is difficult; an exciting middle act where the game feels thrillingly conquerable; and a tedious latter half where enemies fall like skittles before you. Later-game character upgrades let you automatically parry sword strikes or stagger enemies in a couple of swipes, with the counterproductive consequence that the longer you play for, the less skill is required to prevail. Before very long, I was thoughtlessly tearing through 10 Mongols at a time instead of thinning them out carefully before confronting the final few in a true samurai stand-off.

As the novelty of infiltrating forts and clashing blades started to fade a few evenings in, it became increasingly clear that the story wasn’t enough to keep me interested. This is a long game, and it moves slowly. Jin Sakai is stiff even by stoical samurai standards, and the tension between his sense of integrity and the guerrilla tactics he must employ doesn’t drum up much intrigue. “There is no honour in this,” he muses soberly, as I stab what must surely be the 400th Mongol in the back. Perhaps not, Jin, but it’s certainly expedient, and we have a lot of these guys to kill. 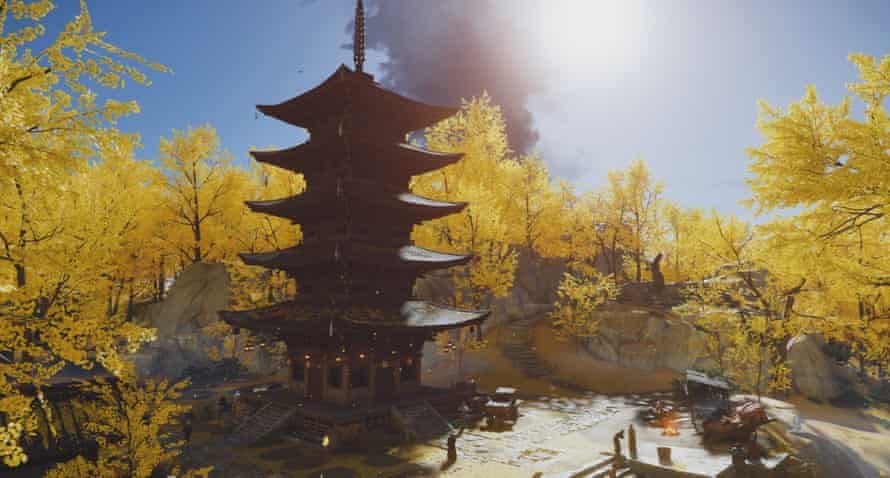 Even the side quests, where the good stuff is often to be found in open-world games like this, show a disappointing lack of imagination. Some farmers have asked me to escort them up the road but lo! We are ambushed by bandits. Best track down this peasant’s missing family member – oh no! They are dead. I must admit that when, after slaughtering untold hordes and successfully storming an actual castle, I was asked to collect some moss for someone, I rather lost the will to go on.

Unlike Assassin’s Creed, which always uses its historical settings as stages for its own eccentric stories, Ghost of Tsushima sticks so closely to the tropes and storylines of classic samurai fiction that it sometimes forgets to have a personality of its own. After I caught myself repeatedly checking my phone out of boredom during the story missions, I decided to abandon them entirely for a while and had a great time chasing foxes, bathing in hot springs, composing deeply average haiku and climbing mountains in search of a legendary bow instead. This is the most beautiful version of Japan ever conjured in code, and when running errands and slashing Mongol spearmen to bits gets tedious, you can always just drink in the view.