In this article, we will look at IoTex price prediction for 2022, 2025 and 2030. We will also look at how IoTex is changing the internet of things (IoT) industry.

IoTex was launched in 2017 as an open-source project with the aim of connecting IoT devices with decentralized applications. Since its launch, IoTex has positioned itself as being the privacy-centric and scalable spinal cord and nervous system for IoT. The platform was founded by Raullen Chai, Qevan Guo, Xinxin Fan, and Jing Sun.

Today, the platform is the leading decentralized network powering the future of Web3 and machine economy (MachineFi). The platform also prides itself on allowing developers to be able to connect with billions of machines using the web3 infrastructure. The products that can be created or connected to the IoT devices using IoTex include DeFi, NFT, DAO, Metaverse and MachineFi applications.

IoTex has a market capitalization of $694 million. It also ranks as the 96 largest cryptocurrency today based on market capitalization. Today, the cryptocurrency is trading at $0.072, a sharp increase of over 4 per cent in today’s trading session. Over the years, Iotex has also had significant price milestones such as setting all-time highs and lows. Below is a price history table with some of these milestones.

IoTex has one of the largest blockchain ecosystems today, with over a hundred projects already using the platform in their development and integration. MachineFi, for instance, uses IoTex to connect machine resources and intelligence as a way to give value to its users. They allow them to become beneficiaries and owners of their data, privacy, and money by giving them the ability to monetize their devices and associated digital assets on a global scale.

IoPay also uses IoTex to help users who frequently send tokens, vote for delegates and interact with XRC20 tokens or smart contracts. Other projects such as Ucam, Mimo, Pebble, and IoTube use IoTex to connect IoT devices with their blockchain technologies.

IoPay also uses IoTex to help users who frequently send tokens, vote for delegates and interact with XRC20 tokens or smart contracts. In addition, other projects such as Ucam, Mimo, Pebble, and IoTube use IoTex to connect IoT devices with their blockchain technologies.

This Thursday @ 9am PST, join us LIVE with @CityDAO @HealthBlocks @IoTeXPad @ChangeNOW_io. A diverse set of builders — don’t miss out!

Looking at the daily chart below, we can see the IoTex prices have been trading within two long-term support levels of $0.047 and $0.062. In addition, the cryptocurrency is also trading within support levels of $0.11, $0.17 and $0.26. The chart also shows that today marks the second consecutive day that IoTex prices are rising. Based on support and resistance analysis of the cryptocurrency, my IoTex price prediction for 2022 expects IoTex prices to be trading at around $0.174 by year’s end. This is the yellow region on the daily chart below.

My analysis also indicates that this will be a 139 per cent return on investment based on the current prices. I am heavily bullish about cryptocurrency this year because the current bearish trend is not entirely an IoTex. The entire cryptocurrency market has been on a downtrend since November 2021. This includes Bitcoin, which has a positive correlation with IoTex. Therefore, the drop in Bitcoin prices resulted in a huge decline in Iotex prices, causing a 70 per cent loss in value since the cryptocurrency markets started to go down. 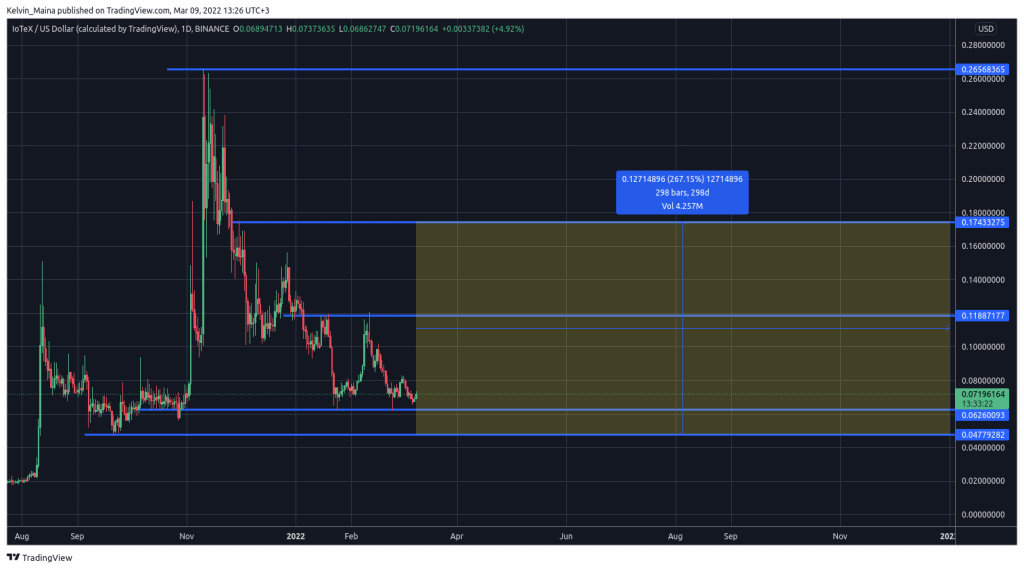 However, there is also a likelihood that IoTex prices may be trading at above a dollar in 2025. This is because the cryptocurrency network is in one of the most competitive and technically demanding fields of blockchain technology that relies on IoT technologies. Today, the IoT industry is over $300 billion, with many experts expecting the industry to grow to over a trillion in the next coming year. Therefore, there is a high chance that the growth of IoT technologies will also positively impact IoTex, leading to its growth.

Research published by Transforma Insights suggests that the global IoT devices will have grown to over 24 billion by 2030 from the current 7.6 billion devices. Many experts also believe that, by 2030, IoT will be a multi-trillion dollar industry. IoTex tapping into billions of dollars that will be running on the IoT environment is poised to have its biggest gains between 2025 and 2030.

My IoTex price prediction for 2030 expects the cryptocurrency to be trading at above $100. This analysis is based on fundamental statistics such as the market capitalization of the IoT industry and the number of IoT devices expected by 2030. It is also based on the current fundamentals of IoTex, where the platform continues to invest in cutting-edge technologies.

Is IoTex a Good Investment?