For all of the cool things that Lenovo is doing in the laptop and Chromebook space, such as the super-unique ThinkBook Plus Gen 3, the company has other laptops that are a bit more boring. And honestly, there’s nothing wrong with that, as sometimes you just need a solid and reliable laptop to get work done and maybe play the occasional game.

That’s where the Lenovo ThinkPad E14 Gen 2 comes in, sporting Intel’s 11th-Gen Core i5 chipset. You won’t find any crazy specs or features packed into this laptop, but that’s really not the point. 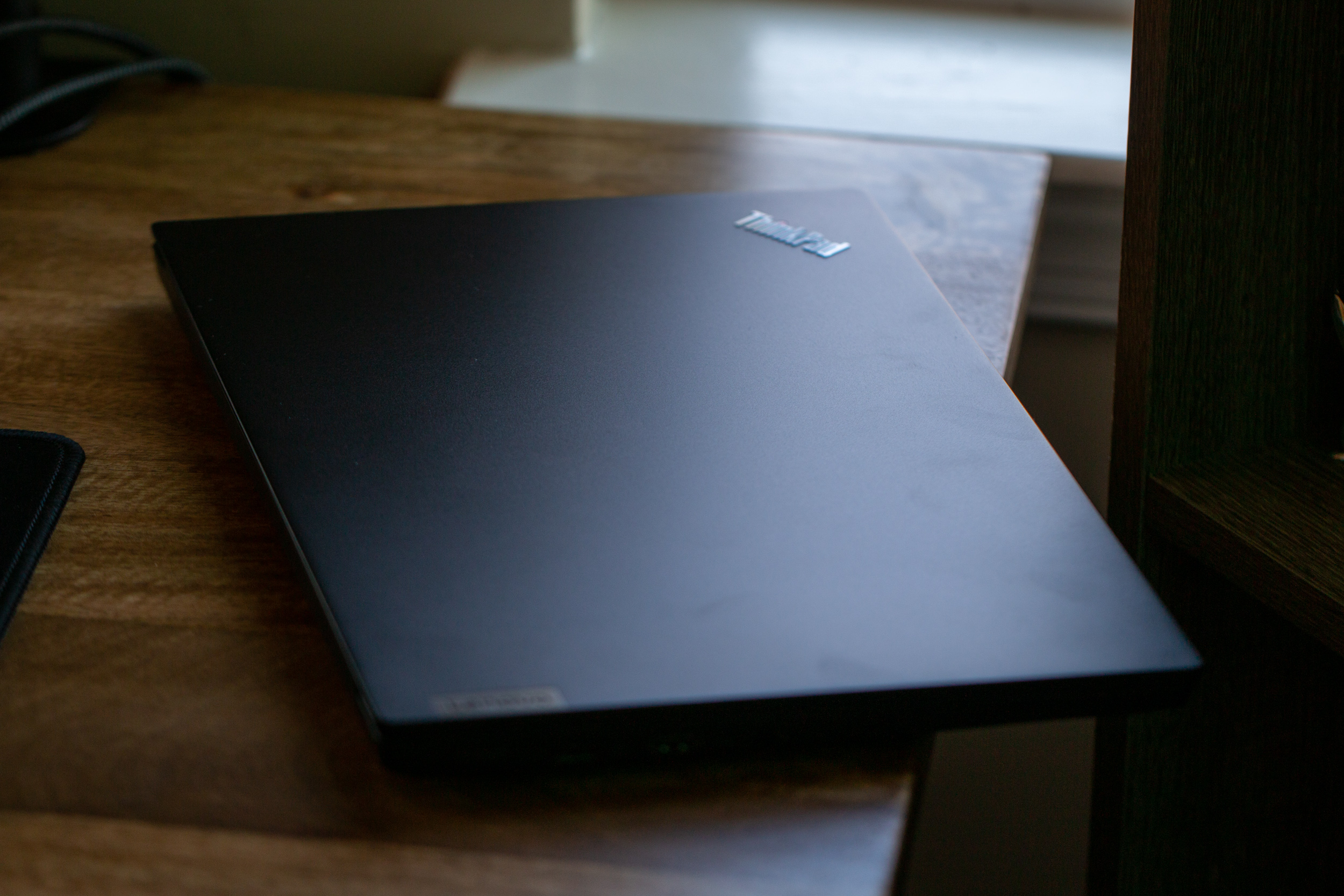 There’s not much to write home about when it comes to the design of the ThinkPad E14 Gen 2. You’re greeted with the same matte finish around the entire body, including the keyboard deck. On the top of the lid, there’s a small Lenovo logo on one side, while the iconic ThinkPad logo can be found in the corner.

Opening the laptop, and it’s much of the same, at least in terms of the ThinkPad logo and the Intel Core i5 sticker on the wrist rest. In the middle of the keyboard is Lenovo’s classic TrackPoint, which doubles as a mouse to move your cursor around the screen. Then, you can rely on the three buttons at the top of the trackpad (below the keyboard), or just click on the trackpad itself. 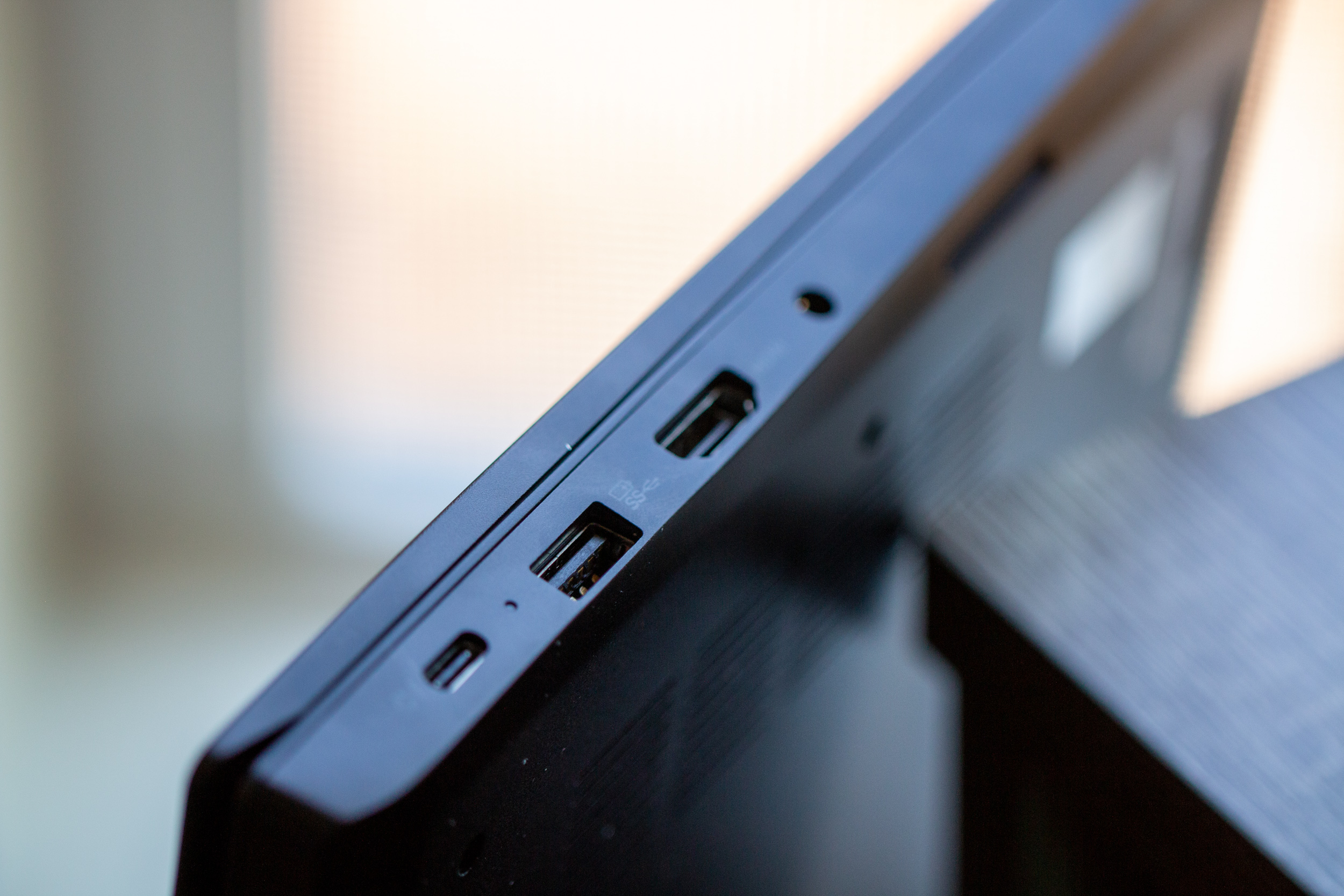 Port options are minimal, but it’s still likely just enough to get the job done. On the right side, we have an anti-theft port along with Ethernet and a single USB-A port. Moving to the left side, there’s a Thunderbolt 4 port, along with USB-A, HDMI, and an audio combo jack. Then on the bottom, there are rubber feet to help prop up the laptop, along with the bottom-firing speakers. 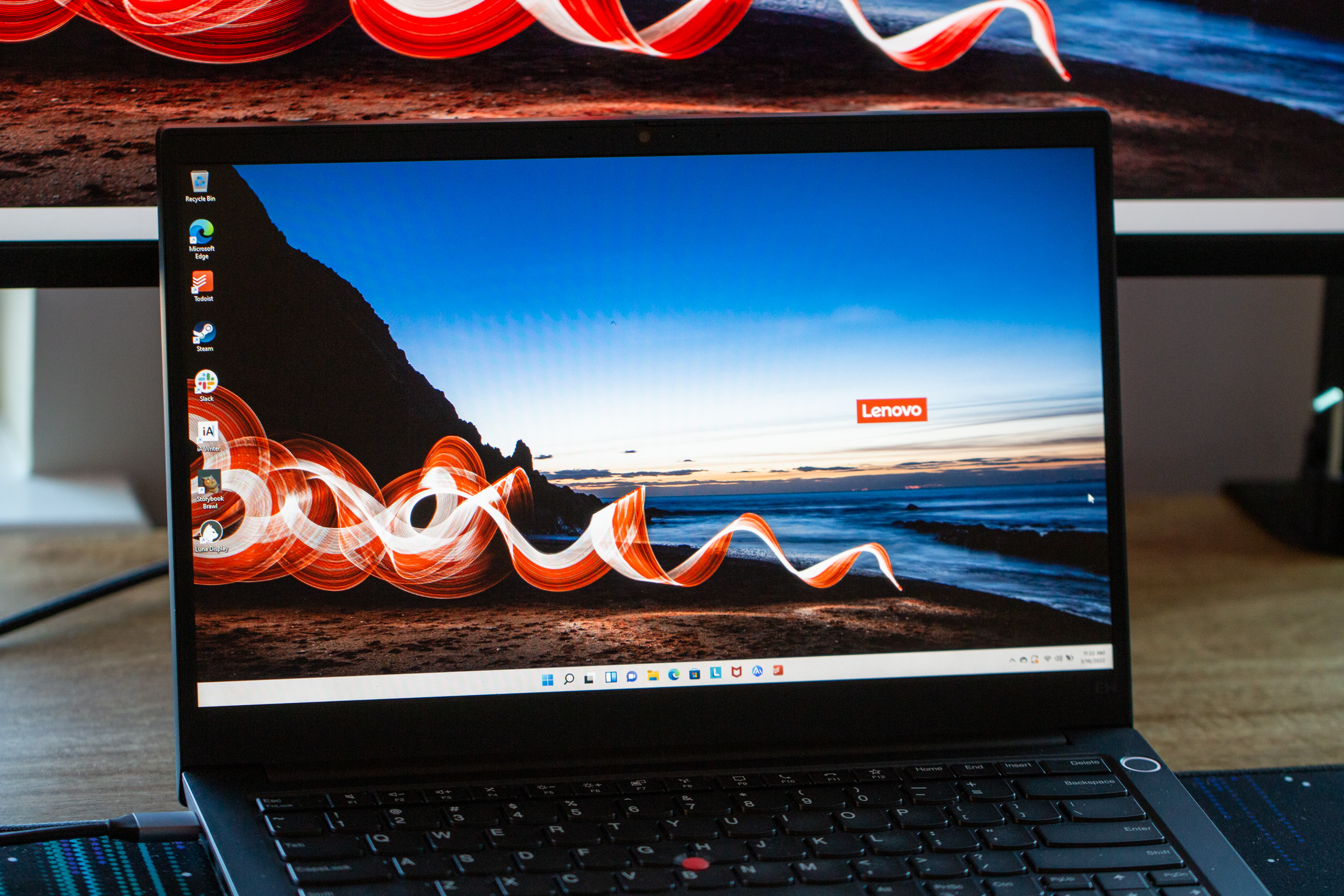 The ThinkPad E14 Gen 2 ships with a 14-inch FHD IPS display, reaching up to 300 nits of peak brightness and sporting an anti-glare coating. Placed above the display, hidden in the thick bezel, is a 720p webcam which is good enough for the occasional Zoom call, but not much more.

In my time with this laptop, there’s one thing that I quickly came to realize – don’t use this outside. Even when the E14 Gen 2 reaches those peak brightness levels, it’s still not bright enough to comfortably see what’s on your screen. Of course, with a laptop that’s designed more for businesses, you likely won’t run into this issue very often, but it’s something to be mindful of. 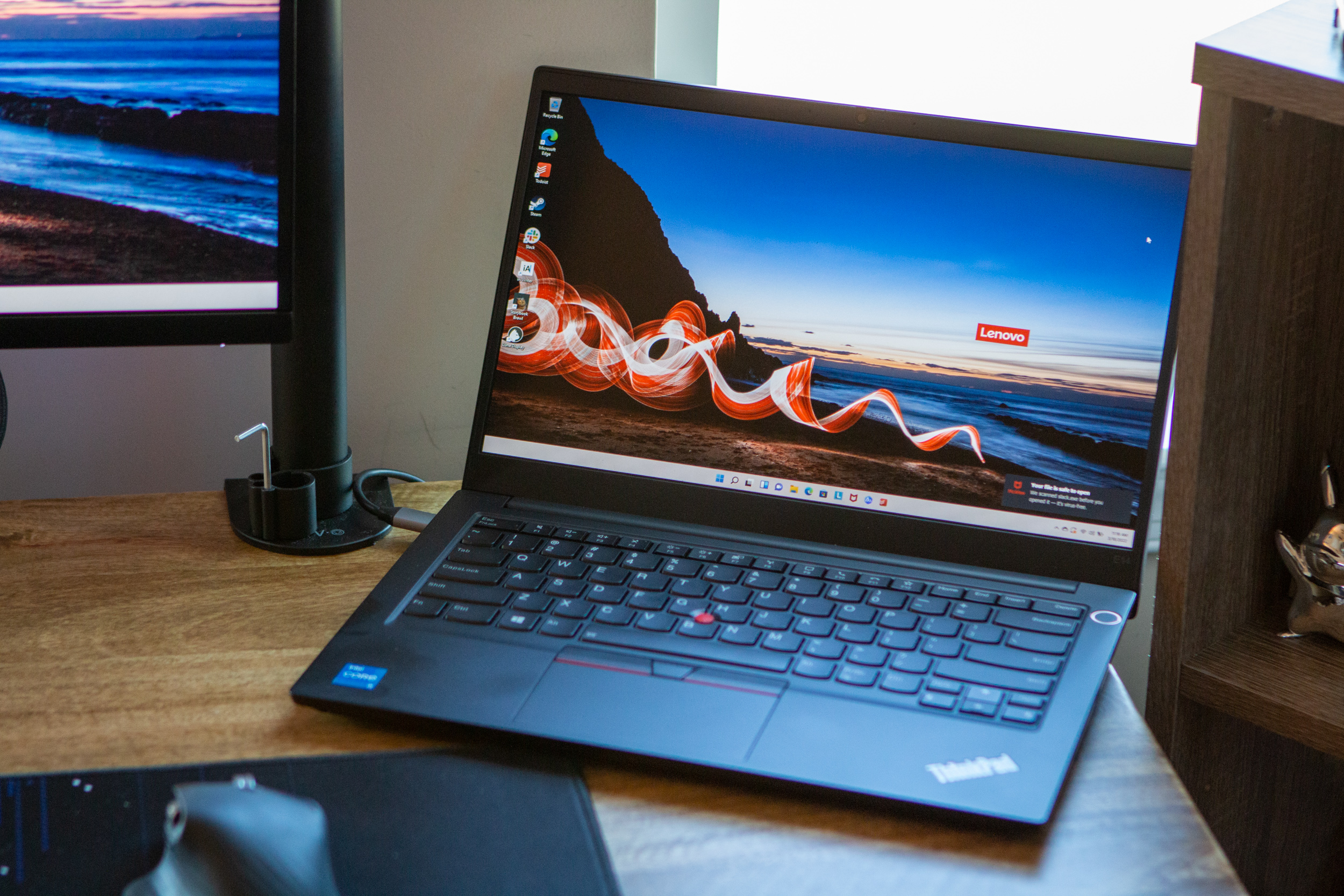 Instead, I found myself using the ThinkPad E14 Gen 2 more after connecting a USB-C hub and plugging in my 27-inch Dell monitor. This is the likely setup for many, as this is a business-oriented laptop. 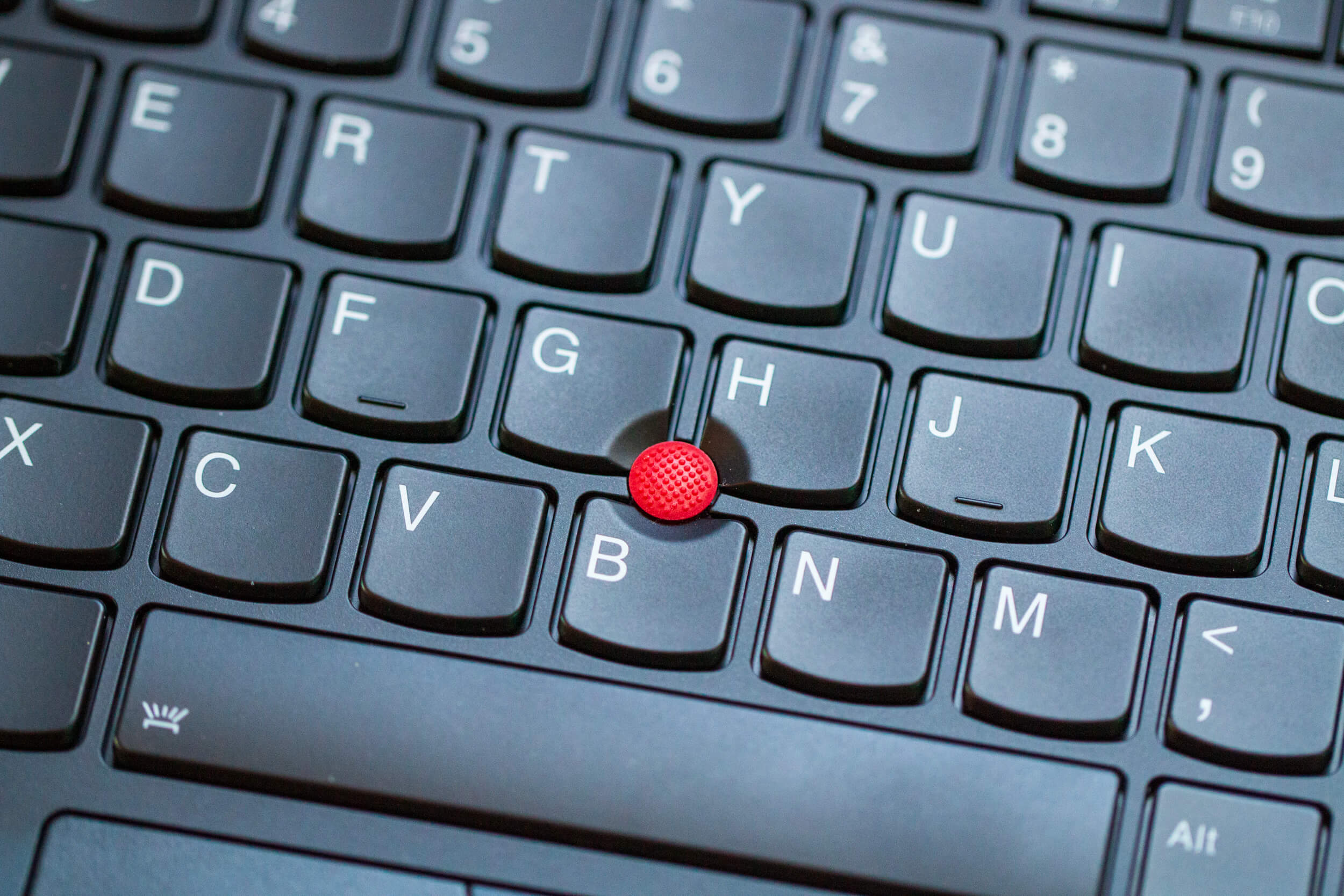 There are two manufacturers that have my heart when it comes to laptop keyboards – Apple and Lenovo. Apple came roaring back after it finally ditched the broken Butterfly Keyboard, and now the keys actually feel solid when you push them. But Lenovo is right there with Apple, as there’s more than enough travel so you don’t feel like your pressing the keys and switches into the frame of the laptop.

The keyboard on the ThinkPad E14 Gen 2 has been a dream to type on and continues a trend of fantastic keyboards on Lenovo laptops. As we mentioned before, you’ll also find the TrackPoint nub in the middle, so you only have to move your fingers if you need to place the mouse pointer somewhere else. 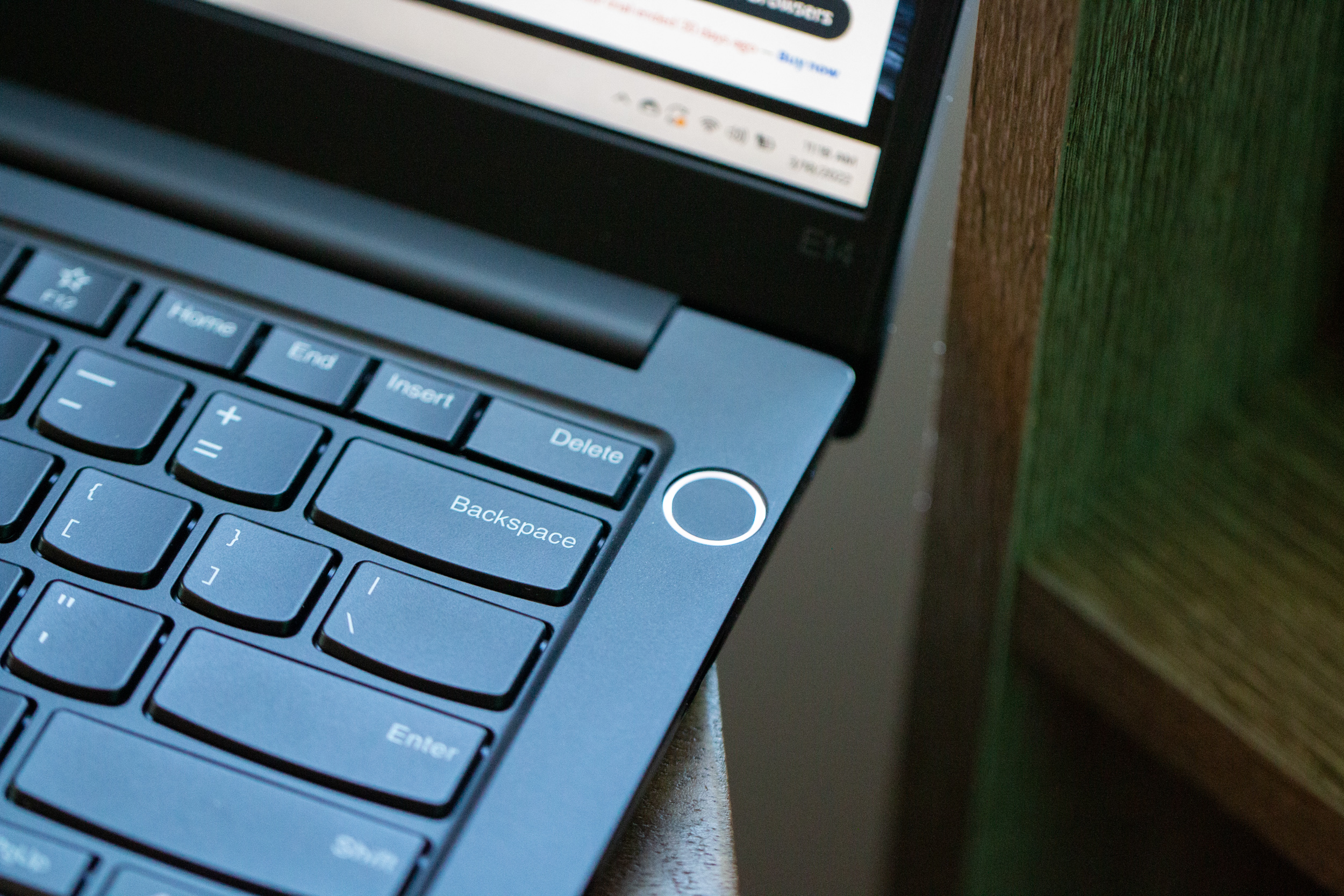 My biggest gripe, from this perspective at least, is with the trackpad. Harkening back to the Apple keyboard, perhaps I’ve just been spoiled by the trackpad found on the various MacBook models I’ve owned. But when using the trackpad with Lenovo’s laptop, clicks don’t register the way you would expect them to. You can, of course, enable tap-to-click, or just use one of the three buttons at the top. And it’s definitely something that we would recommend if you don’t use a Bluetooth mouse. 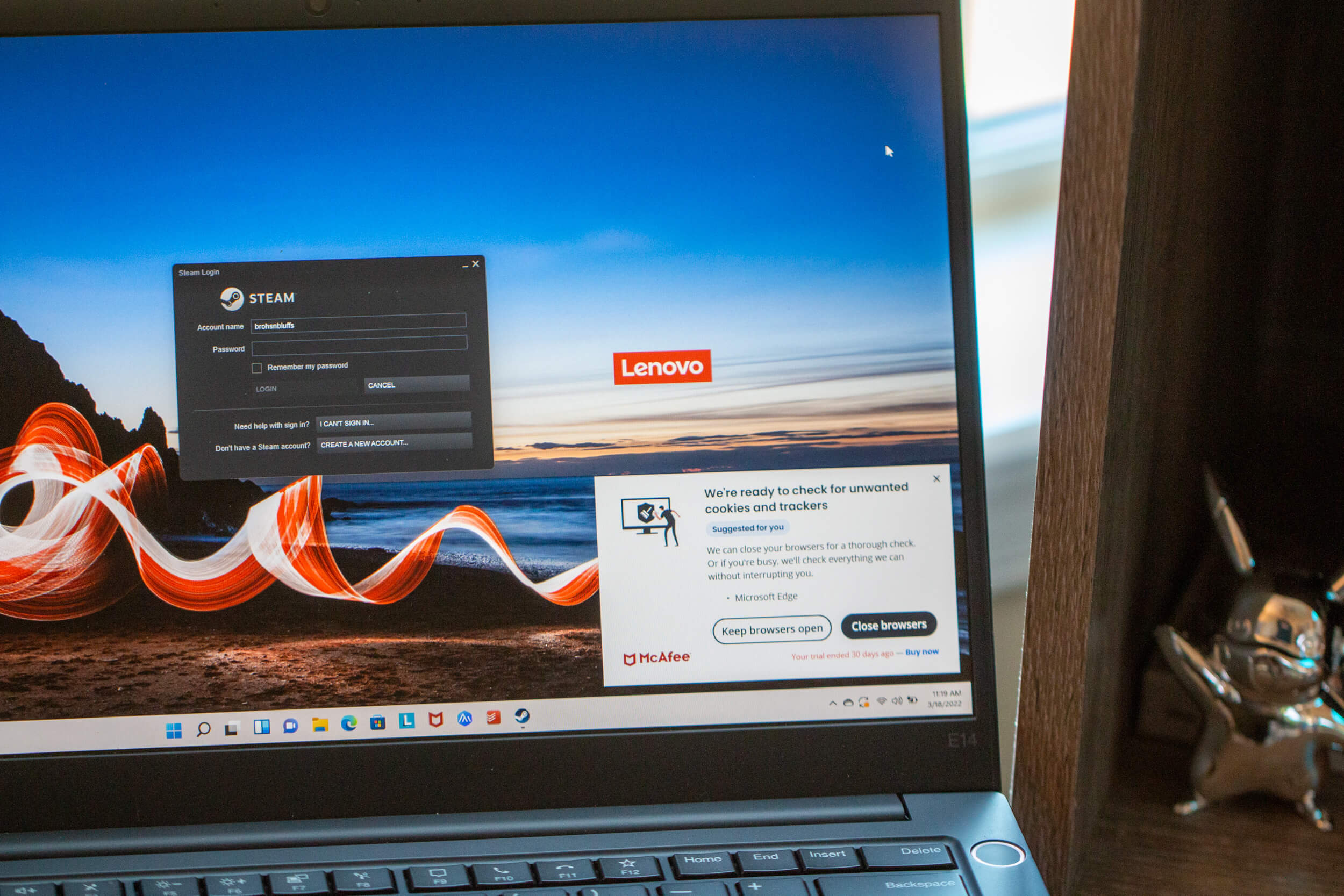 As we mentioned previously, this laptop isn’t going to win any performance awards. It’s equipped with the 11th-gen Intel Core i5 chipset and paired with 8GB of RAM. That’s more than enough to turn this into a slightly more powerful Chromebook, as you’ll be able to install and play some games if you want to.

Photo editing in apps like Photoshop is a no-go as it just takes far too long for images to process, especially if you’re shooting in RAW. That, plus the matte screen don’t really make for much of an impressive combo if you’re a creator anyways.

As someone who constantly has more windows and tabs open than any sane person should, the ThinkPad E14 Gen 2 held up surprisingly well. This is even with pre-installed bloatware like McAfee trying to tell me that it’s “speeding up” the Settings app while I look for different things.

I did come across one hiccup, and I’m not really sure if it was related to my workflow, or if it was the laptop coming to a halt. At one point, I was playing Slay the Spire (from Steam), and had to switch over to Chrome to write something up. Apparently, 8GB of RAM might not be enough for everything all at once because with around 10 tabs open along with Spotify and Slay the Spire, Chrome just decided to crash. I was unable to recreate the same scenario again, forcing Chrome to crash, but if you plan on having a bunch of different apps and tabs open, you might be in for a surprise.

Outside of the trackpad, the other gripe that I had was with battery life. In the box, Lenovo ships a 40W USB-C fast charger that is long enough for you to use at the coffee shop. Lenovo claims that the battery will last for up to about 12 hours on a single charge.

In our testing, the ThinkPad E14 Gen 2 didn’t even come close. The laptop died after lasting for 7:35, which is still pretty good but falls short of the claims. Truthfully, the battery is just fine but it’s nothing that is going to blow your socks off. But on the bright side, you aren’t limited to using the charger that Lenovo includes in the box, as you can just use any USB-C Power Delivery Charger, provided that it’s at least 40W. 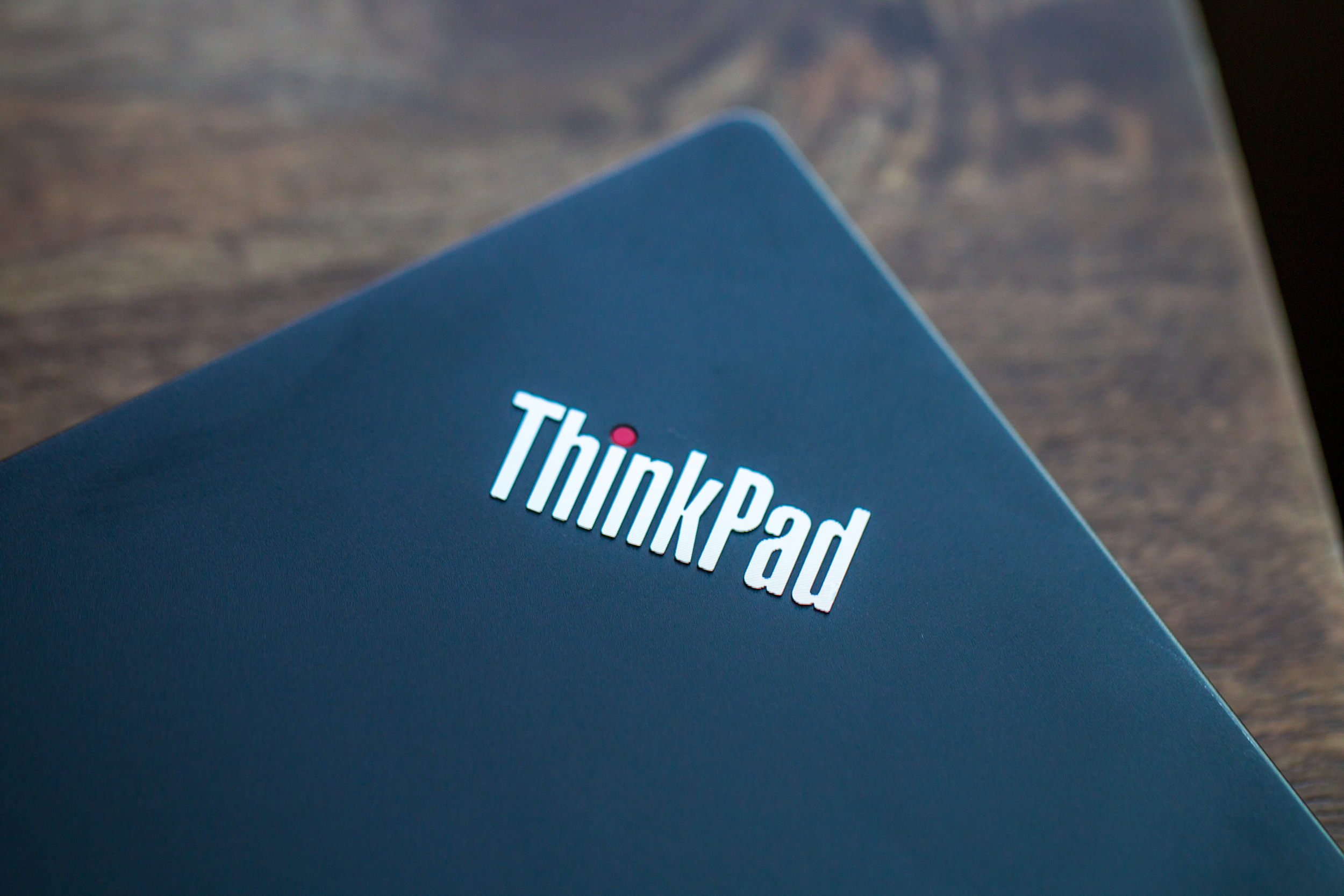 This is the part of the review where I tell you that you should avoid this because of the underwhelming display, and middling battery life. But that’s not entirely the truth. There’s a much larger problem with the ThinkPad E14 Gen 2, and that’s the price.

For a laptop that’s designed with productivity and business in mind, the $700 starting price is just a tad too steep. You can get the same (or better) performance out of one of Lenovo’s Chromebooks. And in the Windows space, Acer, ASUS, and Dell all have options that come in a bit cheaper than what Lenovo offers here.

That’s not to say that the ThinkPad E14 Gen 2 should be ignored entirely. I really did fall in love again with Lenovo’s keyboards, and the ThinkPad branding complete with the TrackPoint are two great reasons alone for you to consider this laptop. I mean, there’s even Thunderbolt 4, which is only just becoming more readily available for other laptops.

But you should think twice before just jumping at this one. It’s a great laptop with limited use cases, and you likely won’t be too disappointed, but just temper your expectations first.

As a standard laptop to get some work done, the Lenovo ThinkPad E14 Gen 2 doesn’t disappoint. But if you start to go outside of the basics, you might not enjoy the overall experience.