Do you have some old shillings and half crowns stashed away in boxes or bottles? They might be worth rather more than you thought.

The rocketing price of silver (it has doubled over the past year) means that coins minted before 1947 – which had real silver in them – are now worth 40 times their face value. Dealers will give you £1 for a sixpenny bit, popularly known as a “tanner” which, on decimalisation in 1971, turned from a 6d into 2½p coin. The old shilling coin, which became the 5p piece, is now worth £2 – actually beating the rate of inflation since 1971.

Unfortunately, “silver” coins minted after 1947 contain no silver and are worth no more than their face value. A reader recently contacted us after helping an elderly friend declutter her home and coming across a 2kg box of pre-decimal English coins, mostly small denomination coppers and silver coins from the 50s and 60s. In an age where we are encouraged to recycle, and where thousands of “more mature” people are likely to have old coins gathering dust, what, she asked, can be done with them?

“After doing a bit of online research, my friend has no expectation that any of her coins are rare,” she said. “We just want to know if there is a service or bank which gives face value for pre-decimal coins or collects them for their metal content.”

The first bit of good news is that, though pre-decimal coins are no longer legal tender, some banks will still exchange them for their decimal equivalent face value. The coins are then returned to the Royal Mint for melting down.

But it’s best to contact a dealer first to see if they will offer more than the face value of the bank – and, crucially, whether there are any pre-1947 coins in your haul. Members of the British Numismatic Trade Association (BNTA) can be found by visiting: www.bnta.net. 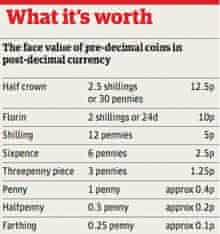 What pre-decimal coins are worth Photograph: Graphic

Coin dealer Chris Perkins, who runs Predecimal.com, a member of the BNTA, says: “The vast majority of people who come to me have just got average, used coins, not rare ones. But many are still worth more than face value. Pre-1947 silver coins contain real silver and are treated as bullion.

“I buy them and sell them via the jewellery trade and pay according to the silver price at the time. Currently a 1920-1946 silver coin is worth around 40 times its face value so I’ll pay around £4 for a florin and £5 for a half crown. And the bullion value of pre-1920s silver coins is almost double that because they are sterling silver. So they are worth selling rather than exchanging for face value at a bank, particularly if you have a few.”

Similarly, the scrap value of pre-decimal “copper” coins (actually bronze containing around 95% copper), which is currently about £4 per kilo, exceeds their face value working out at about four “new” pence per “old” penny. But, as Perkins is only able to collect large amounts of coins from customers in London and the south-east, and advises others to post them via Royal Mail special delivery, you need a substantial amount to make it worth the postage costs.

Perkins pays just under face value for post-1947 silver coins which actually contain no silver – “they are among the most difficult coins to get rid of and I usually try to avoid them” – so people are better off exchanging them at a willing bank.

If you are going to a coin dealer, make sure they are a BNTA member and be aware that the deal will be largely down to trust.

“I try and find out as much as I can about what coins a customer has beforehand, via email,” Perkins says. “If they have a quantity of pre-1947 silver or sufficient volume of copper, I invite them to send the coins by post. And if I find something unexpectedly valuable when they arrive, I will tell the customer and make an offer.”

If you are willing to give the benefit of any value your old coins may have to a good cause, then most major charities will accept pre-decimal coins. Age UK, for example, which sells on old coins for scrap value, says people are best off bringing them into the charity’s high street shops. Oxfam, which also accepts donations in its stores, says it will sell any rare coins it receives at its online collectables store and sell standard coins via currency exchange and conversion company Coincoplc.co.uk.

Though less likely than finding old coins in the back of a drawer, if you are lucky enough to come across a stash of English banknotes, however old, you will have no problem exchanging them for face value.

Genuine Bank of England notes that have been withdrawn from circulation retain their face value for all time and can be exchanged fee-free at the Bank of England in Threadneedle Street, London (open Monday to Friday, 9am-3pm) in person or by post.

You can find a downloadable banknote exchange form, details of how to post off notes safely and what, if any, identification documents you’ll need to supply on its website.