Tsar Peter the Great presided over an actual fashion police. His inspectors stalked the streets of St. Petersburg, shaving beards and snipping inches off coats. 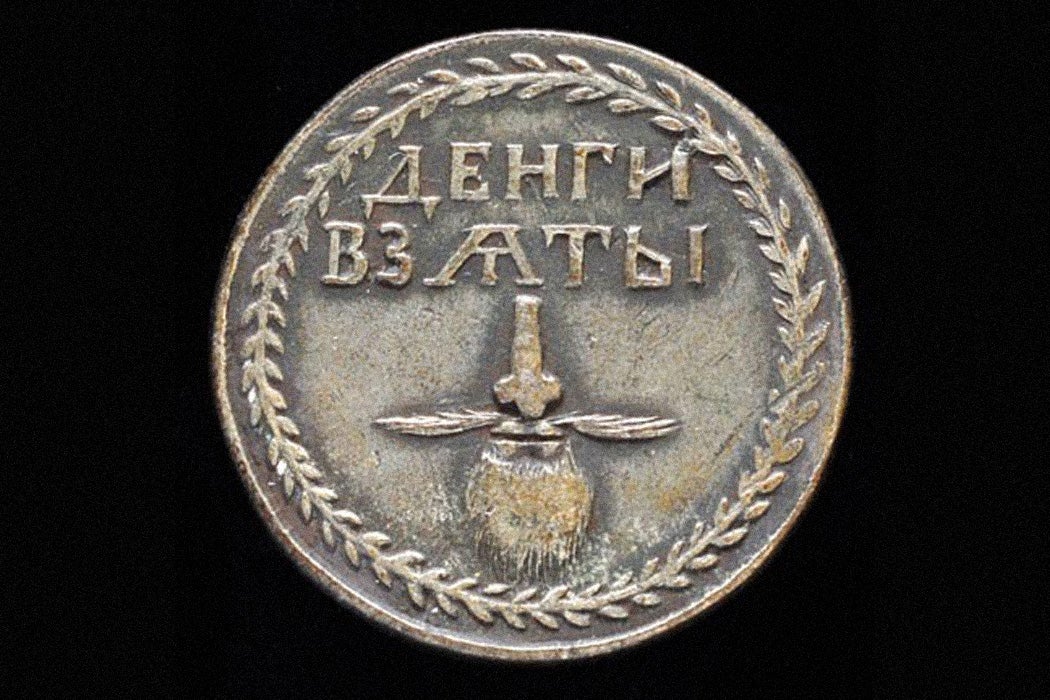 If you were a bearded man in St. Petersburg, circa 1714, a token like the one above would be your only defense against the overweening power of the state. It served as proof that the bearer had paid his yearly beard tax—a few kopecks for peasants, a hundred rubles or more for nobles or military officials.

The beard tax was just one part of a larger project: Peter the Great’s aesthetic reinvention of Russian culture. The tsar ordered his subjects to replace their familiar long Russian overcoats with French or Hungarian jackets. Mannequins set outside the Moscow city gates illustrated the new fashions for all to see. Tailors who continued to sell Russian styles ran the risk of steep fines, and anyone walking the streets in an old-fashioned robe was liable to have it shorn short by the Tsar’s inspectors.

The project had its roots in Tsar Peter’s days travelling around Europe. In 1697, when he set out on a grand tour, Peter chose to travel incognito, adopting the name “Sergeant Pyotr Mikhaylov.” Nonetheless, excited rumors of his visit spread from town to town, heralding him as a giant: 7 feet tall, brilliant, and only half-civilized. The trip would consume the next two years. For a time, he worked at a Dutch shipyard to learn ship-building techniques. He visited heads of state, collections of natural curiosities, and anatomical theaters, and threw legendarily wild parties. One particularly raucous event left every one of his host’s chairs smashed into pieces, his paintings shredded into ribbons, and chunks of pavement torn out of the ground.

He doubled down at his New Year’s banquet, at which his razor-wielding jester worked the crowd, giving a box on the ears to anyone who seemed reluctant to shave.

Upon returning from his travels, he launched immediately into the process of “Europeanizing” his homeland. The first casualty of the tsar’s new enthusiasm were the beards of his court nobles, shorn at his welcome-home party. He doubled down at his New Year’s banquet, at which his razor-wielding jester worked the crowd, giving a box on the ears to anyone who seemed reluctant to shave.

According to Captain John Perry, an English visitor to Russia, the Russians submitted only upon “the Terror of having [their beards]… pull’d out by the Roots, or sometimes taken so rough off, that some of the Skin went with them.” He goes on to tell the story of a carpenter who was obliged by the ukase to lose his beard:

I jested a little with him on this Occasion, telling him that he was become a young Man, and asked him what he had done with his Beard? Upon which he put his Hand in his Bosom and pull’d it out, and shew’d it to me; farther telling me, that when he came home, he would lay it up to have it put in his Coffin and buried along with him, that he might be able to give an Account of it to St. Nicholas, when he came to the other World; and that all his Brothers (meaning his Fellow-workmen who had been shaved that Day) had taken the same Care.

In this, the carpenter was guided by the teachings of the Russian Orthodox Church, which considered uncut facial hair a reflection of piety. Man was created in the image of God; that included the beard. To shave it was a grave sin.

To the pious, the beard tax was a shocking scandal. Rumors circulated that Peter was not the real tsar but a replacement installed by Russia’s enemies. Anonymous letters accusing the tsar of blasphemy were scattered on the city streets. Nevertheless, the shavings continued.

Finally, in 1705, the Russian military division known as the strel’tsy initiated an open revolt in the town of Astrakhan. A letter from the rebels proclaimed that they were taking a stand for the Christian faith, and against shaving and foreign dress. The revolt was crushed, and hundreds of rebels lost their lives.

The beard tax was just one way that the Tsar sparred with the Church. With typical flair, he organized his drinking companions into a club known as the “All-Jesting and All-Drunken Synod of Fools and Jesters.” The members played at being cardinals and bishops and performed mock marriages and ceremonies.

Reading between the lines, it sounds hellish: enforced merriment, compulsory drunkenness, and endless feasts and masquerades. There was no escape from the All-Drunken Synod; appointments were for life. In this way, blasphemy served as a test of loyalty for the tsar’s closest companions. The implicit choice was clear: Peter or the Church.

Get your fix of JSTOR Daily’s best stories in your inbox each Thursday.

As the historian V. M. Zhivov writes in “Cultural Reforms in Peter I’s System of Transformations,” by challenging the Church’s power, the Tsar sought to frame himself as a semi-divine figure, outside of the bounds of normal society:

The emperor demonstrated that he commanded divine power, and society had the choice of either accepting this inhuman superiority or rejecting it as a satanic enterprise. In any case these ludic enterprises posed a religious dilemma for society… The emperor rose above reality and, wielding the power of life and death, transformed that reality according to his desire, turning age-old customs into blasphemous entertainments and playful inventions into state institutions.

Like the beard tax itself, the conflict seems absurd: a few drunken nobles, playing at being priests. But the struggle—one over the very nature of royal power—was deadly serious.

Found: A Coin That Stopped the Tsar’s Police From Shaving You

18 essential watercolour techniques for every artist