The Things Men Do For Coin…

The Things Men Do For Coin… 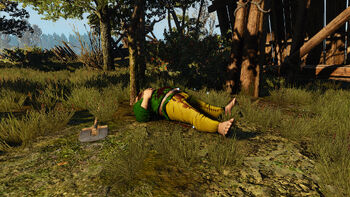 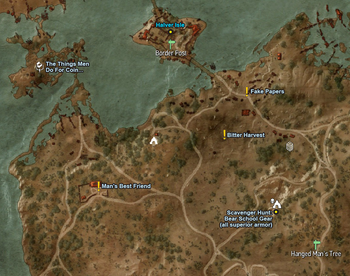 The Things Men Do For Coin… is a treasure hunt quest in The Witcher 3: Wild Hunt.

Head to the hidden treasure marker west of the Border Post and south-southeast of Ursten to find a dead body with a key a letter on it.

After reading the letter, follow the blood trail with your Witcher Senses towards the nekkers and deal with them before following the trail to some scaffolding and a half-hidden box here (the same scaffolding with a bee’s nest on it). Loot it to complete the quest.

Geralt never claimed to be an expert in epistolography, but experience had taught him one of its secrets: dead men carry interesting letters. That’s why he decided to sit down and study closely a certain corpse-borne missive he happened across during his travels.
Villard, you old bastard!
I ken where you can drub up the coin to pay off your many debts – Velen. Now, blatherheads say those bogs ain’t worth a muffled fart from a saggy sow, but don’t ye believe them, mate, they dinnae ken shite from sugar! A man can make a killing there – and a dwarf can do twice as good, I’m sure.
So here’s the craik. While crossing Velen a week or so past, I spied a few well-dressed stiffs laying about the forest, travel bags untouched. Refugees, see, fleeing the war – and whoever flies up to them first gets all their worldly belongings. You ken what I’m saying, mate? Grab a chest, head off cross the Pontar posthaste and strip those stiffs of rings, necklaces and everything else afore some nimbler prick does! Oh, but keep a sharp axe round your belt all the while, for Velen’s pure heevin with monsters. But hey, it’s all in the name of a good cause – filling your pockets!
Your ever-loving Gruggen
Men are willing to do a great many things for coin – lie, cheat and even loot corpses. Villard and Gruggen were no exceptions in this regard. Like many before them, they died, probably torn to pieces by some necrophage prowling the battlefield. Chalk it up as an occupational hazard, I suppose. Luckily, Geralt has good insurance against such hazards – namely the swords he carries on his back.

What Is A Witcher And Do They Really Need Your Coins, A Definitive Answer