Us is Jordan Peele’s thrilling, blood-curdling allegory about a self-destructing America

Jordan Peele’s Us, its title signals, is not a movie from which we as viewers can be detached. It demands from the start that we recognize an uncomfortable fact: Out in the audience, we’re part of the story.

And it’s a movie about doubles and doppelgängers, so of course the title is pulling double allegorical duty. Peele is a walking pop culture encyclopedia, especially horror and science fiction (he’s hosting and producing CBS’s Twilight Zone reboot, which premieres on April 1). So there’s no way he named his Get Out follow-up without self-conscious reference to Them!, the 1954 sci-fi film in which a nest of giant irradiated ants threatens Americans from tunnels beneath New Mexico, a recompense (a voiceover at the end tells us) for the hubris of the atomic age.

The title also obviously signals that this movie is about us — first-person plural, audience and filmmakers alike — but with some additional specificity: US = United States. As one of the characters rasps once the film cranks into gear, “We are Americans.” Us is a movie about America.

Rife with symbols and encroaching apocalyptic dread, Us is a big, ambitious fable about how a society develops willful amnesia, then tears itself to pieces. Like last year’s Hereditary and the upcoming The Lodge, it’s horror cosplaying as family drama. But unlike those movies, Us’s target isn’t intimate; it’s a whole nation that doesn’t want to remember the less savory parts of history.

It also works best if you don’t try to pick it apart too much and stitch together a coherent mythology. Us is likely to frustrate people who crave plot points that can be coherently explained and mapped explicitly, directly onto the real world. In this way, it feels less expertly crafted than Get Out, though also more ripe for rewatching, considering from new angles; your mileage may vary. And what people see reflected in the film may say less about the film than it does about themselves. (It’s no accident that some posters for the film feature inkblot imagery to clearly mimic a Rorschach test.)

But no matter who’s watching, the movie is richly entertaining and unnerving. Us is more intuitive than explicatory, more visceral than diagrammatic; it’s horrific in a way that hangs onto your gut when it’s all over.

Us turns a family trip to the beach into nightmare

Humans seem to find copies of themselves terrifying. Traditionally, seeing your doppelgänger means death is nigh; in some cultures and times, twins have been considered so unlucky that one in a pair is killed after birth.

So it’s quite frightening when, at the beginning of the film, young Adelaide (Madison Curry) — a child visiting a boardwalk amusement park on the Santa Cruz beach with her bickering parents in 1986 — wanders away into a funhouse and, in the hall of mirrors, is confronted by her own self. Not a reflection of herself. A copy of herself.

In the present day, Adelaide (Lupita Nyong’o) is on vacation with her husband Gabe (Winston Duke) and two children, Zora (Shahadi Wright Joseph) and Jason (Evan Alex), at the family’s beach house near Santa Cruz. Gabe suggests they go to the beach to meet up with their friends Josh (Tim Heidecker) and Kitty (Elisabeth Moss), who cordially despise one another in between raising their twin teenaged daughters (Cali Sheldon and Noelle Sheldon).

Adelaide looks stricken at Gabe’s suggestion, but eventually agrees to go, though only warily. While they’re on the beach, Jason briefly wanders away, scaring Adelaide half to death. But soon, all’s well, and the family returns that evening to wind down and get some sleep. 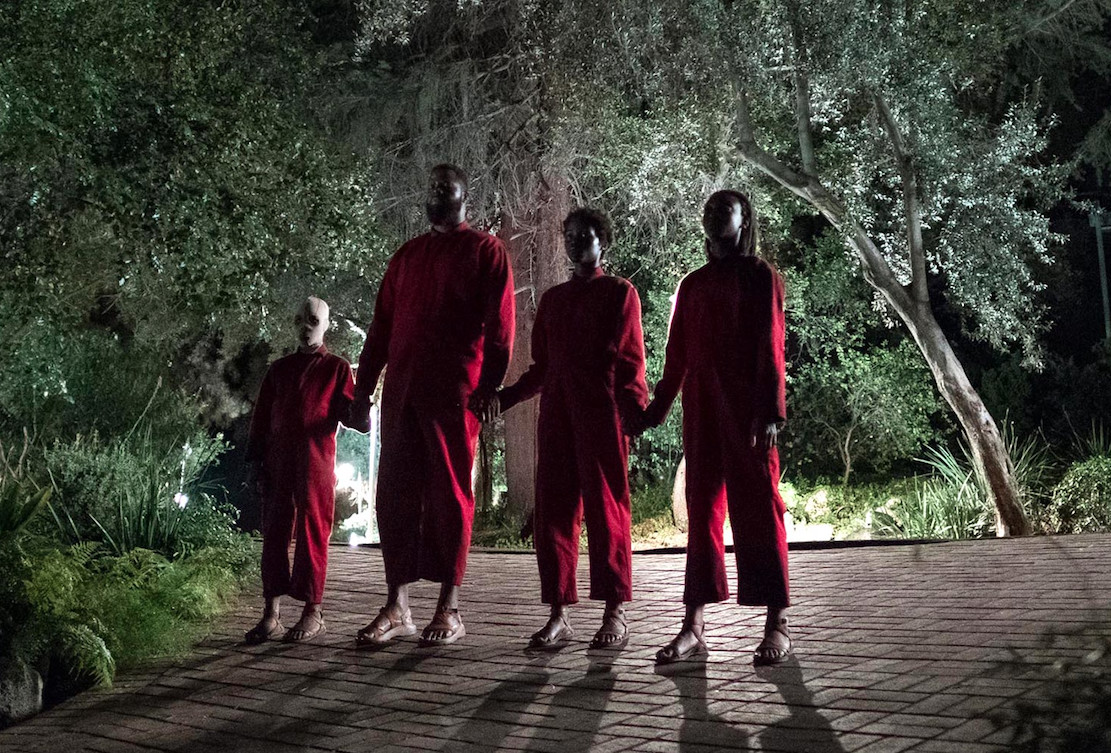 And then, they see four figures at the end of their driveway, holding hands, standing motionless. They won’t go away. When, all at once, they converge on the house, the family discovers to their horror that these aren’t mysterious strangers — they’re the family’s doppelgängers, their exact doubles, except twisted, angry, and out for blood.

Us focuses on the broader social context of its horror

It’s a chilling premise that keeps expanding outwards, challenging what we think we know about the world of the film. Drawing on tropes from home invasion horror, monster movies, supernatural thrillers, and eerie social chillers, Us slowly builds the case that our greatest enemies are our shadow selves, the parts of us that we like to keep hidden.

But Us is less fixated on the individual psyche, more on the broader cultural and social implications of this idea, and how it’s shaped the way we talk, think, and act on matters of race and class in America. The family is hounded by their own doubles because of long-forgotten events they did not personally set in motion. America’s efforts to forget this history has led the country toward this apocalypse of its own creation.

This metaphor, by my lights, escapes being a little too obvious very narrowly. Peele largely manages to skirt potential clumsiness with the deft directorial hand (and punctuations of humor) so evident in Get Out. The film’s beats feel deliberate and solid, not ponderous. Anything could change at any second. Nobody is safe. 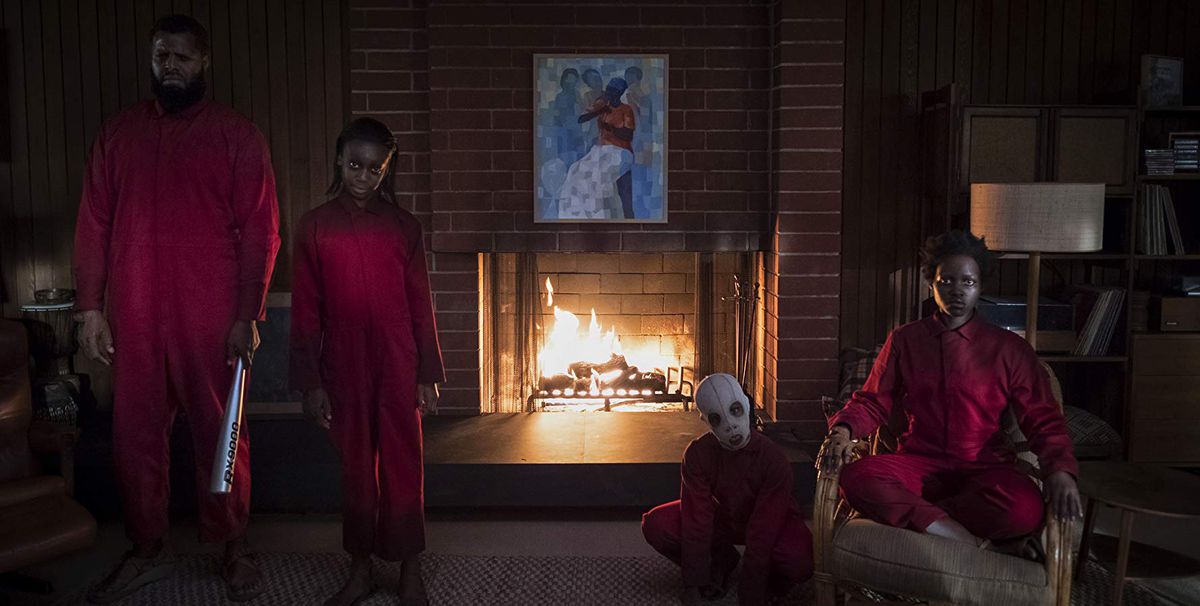 Each actor has the especially difficult task of playing themselves as well as their own, twisted double — even the children — and their vacillations from frightened to wounded to deranged are the source of most of the film’s horror; there’s nothing scarier than a demonic grin on a young girl’s face. Everyone is uniformly terrific, but Nyong’o’s performance as the film’s narrative and moral center is virtuosically creepy and heartbreaking, like she’s swapping out souls between — or even during — takes.

The cast’s considered, meticulous adaptability to their dual roles fits with the rest of the film’s own eye for detail. Everything we see on screen seems intended for us to note and consider, from the VHS tapes on the shelf next to a TV in 1986 (Goonies, C.H.U.D.) to the logos on the kids’ T-shirts (Jaws, Hands Across America, Michael Jackson’s Thriller).

The funhouse into which young Adelaide ventures is called “Shaman Vision Quest,” with a cartoonish Native American figure draped over the name, but by the time the family revisits the beach decades later, it’s been changed to “Merlin’s Enchanted Forest,” with no remainder of its racist past. A recurring reference to the 1986 anti-poverty Hands Across America campaign (which raised $34 million, but only actually distributed about $15 million, less than half, to the poor) becomes more and more significant as the film goes on. And an early shot slowly pulls back on cages of rabbits, stacked on top of one another; a sea of white rabbits is punctuated by a couple of brown and black ones. That’s no accident.

None of this is accidental. In Us, everything matters.

Us warns that a destruction of biblical proportions is coming, and it started inside our own souls

Of all of Peele’s deliberate choices, the doubling motif is the most important. It furnishes the impetus for the plot, but it shows up in other ways. A man shows up on the boardwalk in both 1986 and the present day holding a cardboard sign, on which is written, in crayon, “Jeremiah 11:11” — “Therefore, thus says the Lord, Behold, I am bringing disaster upon them that they cannot escape. Though they cry to me, I will not listen to them.”

The verse’s significance is more clear if you look at it in context, just as the movie only makes full sense with knowledge of America’s history-phobic culture: We prefer to forget the parts of our history that make us uncomfortable. In Jeremiah 11, God is speaking to the prophet Jeremiah about the covenant he made with the forefathers of the people of Israel when he brought them out of slavery in Egypt. The nation, God says to Jeremiah, has “turned back to the iniquities of their forefathers.”

Later in the passage, Jeremiah realizes the people are plotting against him, because they don’t want to hear this message. The nation has forgotten God and its history, and God has decided to give it over to destruction.

That’s an obvious warning for people who’ve forgotten their country’s history of oppression and bloodshed. What Us suggests is that, if we are headed for destruction, the destroyers won’t be invaders from the outside — the “other.” They will be, well, us.

Obviously, there’s no clear doubling theme in the verse itself (though God repeats the same warnings several times, almost verbatim, in the chapter). But Peele got a little lucky with the reference: 11:11 is, itself, a double of doubles. To make sure we get it, he repeats it on an alarm clock screen just before things start to go very wrong in the movie. And there are other doubles all over the movie: window reflections, twins, mirror images, and, of course, the doppelgängers themselves. 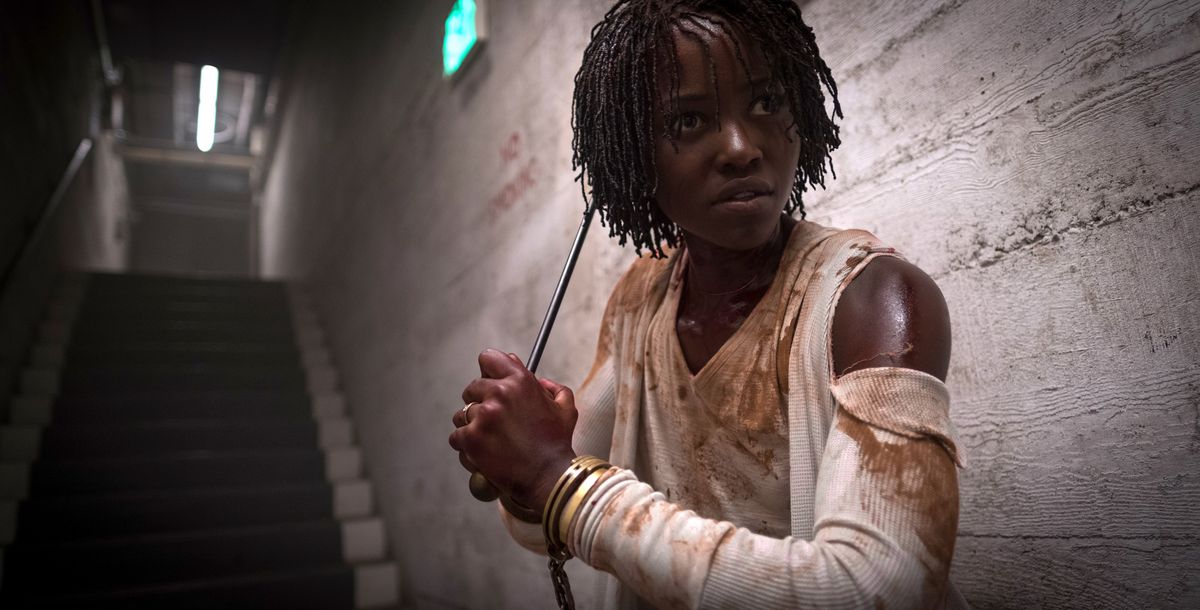 The key notion in Us is that our shadow selves, our reverse negatives, are not separate entities from ourselves — we are simply our own aggressors. A nation of people who prefer to erase their misdeeds rather than acknowledging and rectifying them becomes, quite literally, a house divided. It’s going to fall.

Which is why Peele’s callback to Them!, a 65-year-old product of an era feverishly obsessed with the follies of the atomic age and a lurking Cold War menace abroad, is so important. There are clear parallels — both films are about underground tunnels in which lurk dangers, created by humans, that will someday explode to cause our doom. But Them!, from its title, fingers the danger as something other than humans (and in the movie, giant ants). Humans created the danger, but it comes from creatures wholly unlike ourselves.

But in Us, Peele brings the critique closer to home. The fault for our destruction isn’t that of foreign agents. The poison lurks in our own souls.

Us opens in theaters on March 21.

‘Us’ Review: Jordan Peele’s Creepy Latest Turns a Funhouse Mirror on Us – The New York Times

Review: Jordan Peele’s Us Is Dazzling to Look At. But What Is It Trying to Say?